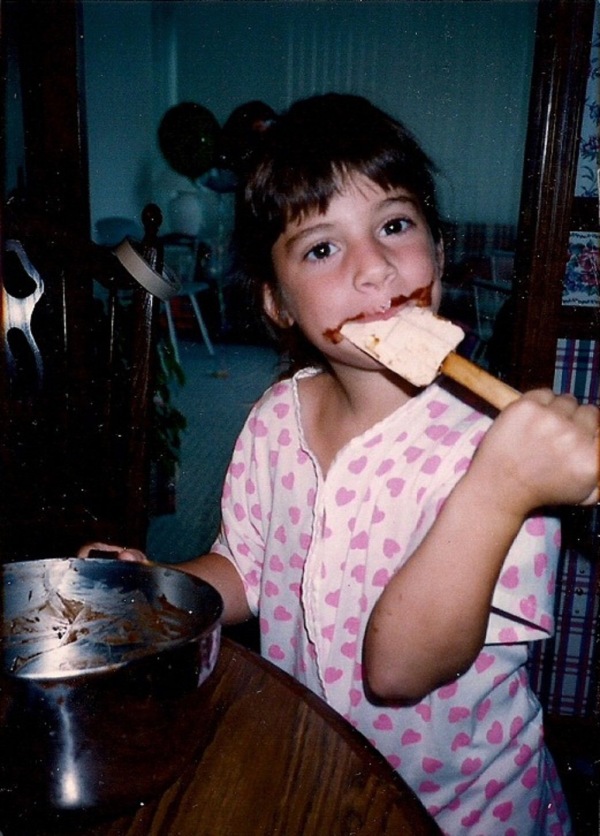 My parents invited us for dinner last Saturday night. We all had a taste for my mom's signature burgers- Karla Burgers. Sorry for all those hoping to get their hands on her highly coveted recipes. That recipe shall never be typed…I had to wait 27 long years and get married before I was able to have that recipe along with a few others. She's STILL holding out on me with a few.

Earlier in the day I stopped by their house and was looking through this magazine she received in the mail. She has no idea where it came from, "they just started sending it!" Being invited for dinner isn't an odd thing nor a rareity, so as I'm looking through these magazines I decided I would make an appetizer and dessert. I found this recipe from Ted Allen a year or two ago and bust it out every so often. I mean who doesn't love some ricotta cheese, arugula and prosciutto on toasted bread? I'm glad I picked a simple appetizer.

I have enjoyed baking for a long time. I secretly wanted to bake as a child to lick the bowl after my mom would make brownies. I don't do this anymore. It TOTALLY freaks me out. I mean you've heard of salmonella right?!?! But nevertheless, it began a love of baking! 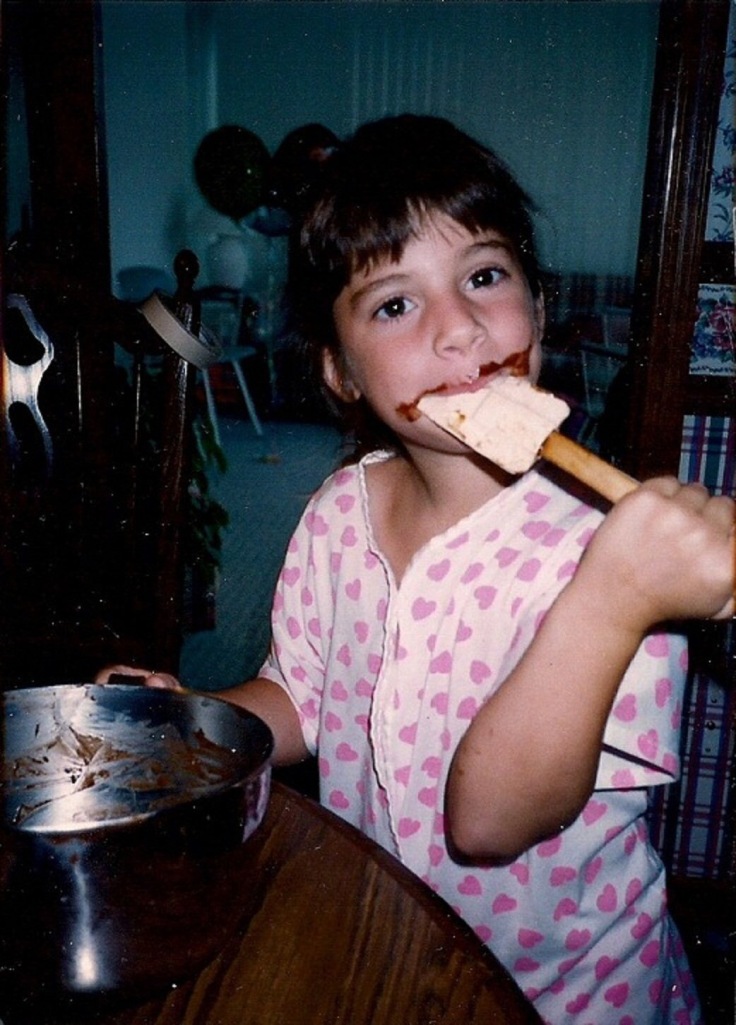 On a total side note that mixing bowl pictured above is my all time favorite bowl. I was very excited when my mom gave it to me. I use it so much.

Back to my dessert! I decided that I wanted to try something completely new. This is my year of adventure and I can make cream puffs in my sleep, or cupcakes or brownies, but those are kind of boring. So after searching through multiple magazines I stumbled upon a cream cheese pound cake recipe. Apparently if there isn't a pound of butter it's not really a pound cake. This recipe had 3/4 # so it's my 3/4 pound cake. I purchased all of the needed ingredients and decided on a lemon pudding to top it. I didn't start the cake until a bit before 4 and learned my lesson- it too 100 minutes to bake. I guess I really should have read the entire recipe before I decided to make it.

The pound cake was SO much better then next day. My mom told me I found my signature dessert, my husband called me the queen of pound cake. Hey! I'll take it. So invite me over and I'll bring my pound cake with me! I just need to some advanced warning! 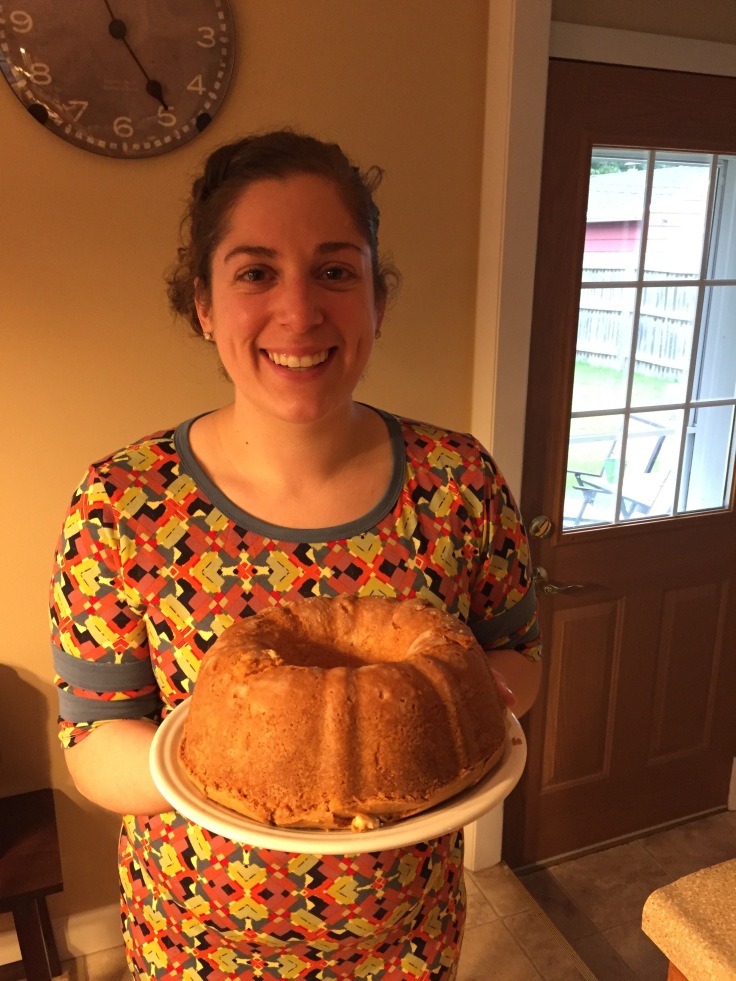 My grandparents recently decided to make the move out of their home into an apartment. It's much less work for them and much smaller than their home. In the weeks leading up to the move there have been lots of trips down memory lane for the granddaughters, in particular.

We decided that most of our memories are stored in the basement. If only those walls could talk…more on that later.

My grandparents moved into their house in 1989, the year my cousin and I were born. So we literally know no other house. G & G's house was where you were quickly handed off on the way to work when we were sick. My older sister recalled the old brown coach and watching Fantasia. She said, "for the record, is the worst movie ever! I know it's a landmark movie and big Disney accomplishment. But it's awful. It made me sleep!!" Our mom said that was the point.

In 7th grade, I switched to public school which was walking distance to their house. I'd have a snack before I was picked up. Anything that was opened was fair game to eat.

I ate lunch at my grandparents house every other day my junior year of high school because I had a release from school. My lunch instructions would be waiting for me. Which was usually soup and a sandwich to make. Sometimes they were there but usually they were busy. I'd make my lunch, do homework then set a timer for a quick nap and head back to school.

There a millions of little memories, but we spent the bulk of our time in the basement at our restaurant. We loved that place! We would save food containers for to go boxes, pie boxes to sell pies in. We bought French fry baskets for serving food. And of course the fridge where we served our "guests" actual beverages. We had menus, order tickets and a cash register with real cash. One Christmas after we were much too old for our restaurant anymore my grandpa handed us all an envelope with a very random amount of money in it-the reminder of our cash register money. I
guess you could call that our profits.

One Easter my grandma let us throw hard boiled eggs over the roof to our partner. No idea why, but it was fun. We used to race the mechanic sleds (if you call it that) down their driveway, with helmets on.

I could go on and on because we have so many memories. But on to the next place for more memorable moments.