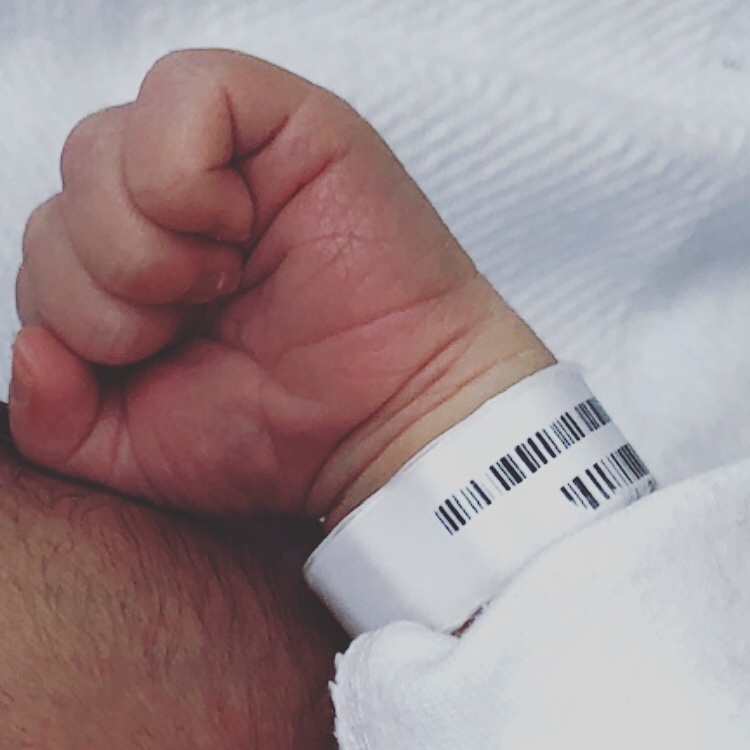 Just a few short days after my last post we welcomed our son to the world. He was only 2.5 weeks early and considering we were preparing for a much earlier delivery, I was happy. My water ended up breaking in the middle of the night which meant we had to head to the hospital, but not before we each took a shower! For some reason that felt important for me, not that it made a difference. But, it was two more days until I got another one so in retrospect that was a good thing.

I needed to have a c-section because the baby was breech. As we drove to the hospital and I walked into the Labor and Delivery department, I really wasn’t nervous about being hours away from getting sliced open and becoming a mom. But as the hours ticked away, I definitely grew more nervous and started to feel more contractions which really felt like cramps. We would have been waiting a LONG time if I didn’t have a c-section.

At 8:41 am, my husband announced to everyone in the operating room that it was a boy! I couldn’t believe it because despite feeling like we were having a boy for most of my pregnancy I started to feel towards the end it was a girl- mostly I think to just prepare myself for a girl just in case.

One of the things they asked me before the c-section was how I planned to feed my baby. I was looking forward to breastfeeding, besides all of the benefits it has, I knew that I’d be able to bond with my child as well. I knew that it would be hard work but having just finished growing a human, Bring. It. On. He struggled with breastfeeding because he had a lip tie, preventing him from getting a good latch. The lactation consultants said because his mouth was small that added to his troubles. But we kept trying. We went the pump and feed with breast and formula route. The formula was his supplement until my supply came in. At 1.5 weeks old he saw the pediatrician (thanks to the polar vortex and not being able to go outside) that he was then refereed to the ENT to have his lip tie snipped.

He still was struggling and after 2 weeks of birth I still had little supply to give him. I can’t tell you how badly I wanted breastfeeding to work. I cried so many times because I couldn’t figure it out and he wasn’t gaining weight fast enough. So we had to literally feed him every 2 hours which was stressful as well. We would finally get him to sleep only to have to wake him up less than an hour later. After I was ready to claim defeat in the breastfeeding department I threw my pride to the side and made an appointment with the lactation consultants. They were a great help and provided me with nipple shields to help him. Long story short after a few weeks of trying to breastfeed him right away in the morning when the supply was high enough, I kept growing frustrated and he hated the entire thing. I decided that this just wasn’t in the cards for him and that some was better than none. So I continue to pump. I have the same supply that I left the hospital with, but I so wanted to be able to just have my body provide for him. Clearly it didn’t get the memo!!! Which is frustrating and really bothered me (some days it still does). I’ve decided that a lot of this “guilt” comes from my background.

As a Registered Dietitian I’ve learned all about breastfeeding and how it’s the best for the child, the benefits to the mother, etc. It’s been engrained in the brain and something we would tell patients as well. Once I got past this mental complex – which my boss actually pointed out to me on a visit with the little man to the office-that my body just couldn’t do it, it got better for me.  I had to tell myself that I wasn’t a failure or a bad mom because of it. But every time I pull out that bottle in public I feel like I’m getting the mommy glares. Yea lady…I’m talkng to you. Most recently at a baptism meeting where another mom had her bottle of breast milk out as I fed mine. The facilitator asked the other mom about feeding solids to her much older son than mine. The facilitator recognized the color of the breast milk then looks over to me and says “Formula?” and had that look on her face. Before you’re so quick to judge others, you should think twice. You just never know the struggles behind the person who is feeding that child. It wasn’t a choice I really could make, my body made it for me! But boy did I hope and pray that my body would change it’s mind- today would be the day, I just knew it. Well…today never came.

And let me tell you about C-section recovery. It is no joke! Here we are 8 weeks later and I’m starting to feel more normal and not in pain but it was one heck of a recovery. Having a C-section doesn’t make you any less of a mom either. I can only imagine what the woman who had a 12+ hour labor feels like. I give her mad props because you had to endure that pain and anticipation for a long time! I am sure that mom would do the same for someone like me. Laying on a table in an ice cold room as I quickly lost all feeling in my body below my chest from the spinal block. Staring up at the ceiling and a blue curtain while I hold my husband’s hand and waited to hear my baby cry for the first time. Because at the end of the day we both did something incredible and miraculous! If nothing else, this blog post is part of my healing process. While I’ve mostly physically healed, other healing takes time.

Hopefully someone else will read this and feel that it’s ok. Ok to make the unpopular decision. Ok to give yourself time to figure this all out. Ok to change your mind and certainly ok to laugh at yourself for all the things you “surely wouldn’t do as a mother!” There are far too many stories, posts and photos out there that make you feel like you failed or should have done something differently. But you didn’t! At the end of the day none of that matters! Years from now my son won’t ask me why I did or didn’t do certain things, because he will be too busy being the perfectly happy little man that we raised. So give yourself time to heal and then start enjoying the little moments!

One thought on “Birth. Life. Healing.”

This is a text widget. The Text Widget allows you to add text or HTML to your sidebar. You can use a text widget to display text, links, images, HTML, or a combination of these. Edit them in the Widget section of the Customizer.